St Giles International London Central’s Principal, Mark Rendell, made his film debut in The Bromley Boys, a feel good film that is set for release on DVD on 22nd October.  Mark plays a Bromley FC player (#6) in the film which is based on a hilarious novel by Dave Roberts about a boy, a girl and the worst football team in Britain in the swinging 60s. 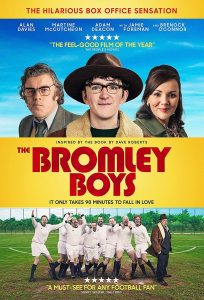 Mark who lives in Bromley, Kent, is a Bromley FC season ticket holder and answered a call for supporting actors on the club’s website. When he arrived for filming he was shocked to be offered a place on the team. “I guess the fact that I was slightly over-weight and hadn’t kicked a ball for fifteen years made me the perfect choice for a place in the worst football team in Britain”, said Mark. He was also taken aback a little when he sat down for makeup and the makeup artist declared that his hair style already suited the period and needed no modification.

He attended the film premiere at Wembley Stadium rubbing shoulders with a number of well-known British actors who starred in the film: Martine McCutcheon (Love Actually and singer), Alan Davies (QI and Jonathan Creek), Ewen McIntosh (Keith in the Office), Brenock O’Conner (Olly in Game of Thrones) and Jamie Foreman (East Enders).

Mark found the experience fascinating and addictive and enjoyed the excitement when the camera was rolling. “I appear in most of the football scenes”, explained Mark but he lamented that he, “always seemed to be running in or facing the wrong direction”.

He had better luck (?) with the party and dressing room scenes though where he can be clearly seen in a variety of poses including a close up of a romantic slow dance with the club secretary. “This was the one scene that I wished I had appeared in the background,” said a red-faced Mark.

Despite Mark’s new found fame he is keeping his feet firmly planted on the ground and he confirmed that he won’t be taking his talents to Hollywood just yet.

The Bromley Boys DVD is set for release on 22nd October.