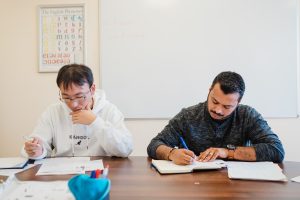 English is a mishmash of other languages, because of ancient invasions, settlements, colonial influences and international trade. In the UK we have the British spelling system, which is different from the American spelling system practised in the USA. If you learn English in Canada, the spelling system is a combination of both the American and British systems.

If you are feeling brave, ask: why is it spelt like that?

It is likely that once upon a time it was pronounced the way that it is spelt! Take these words, for example:

‘Gh’ is an ancient digraph and although it is pronounced differently today, Originally the ‘gh’/x/ in all these words was pronounced similarly to /ç/.

Hundreds of years later this pronunciation evolved and became a /f/ sound. We can still see this phonetic pattern in words like ‘cough’, ‘enough’ and ‘rough’, but in some words like ‘thought’, ‘though’ and ‘through’ even pronouncing the ‘gh’ like an /f/ became unfashionable and the ‘gh’ became silent. 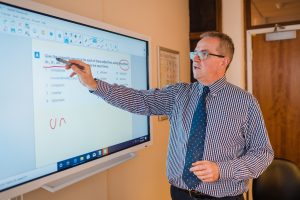 This happened with so many words! For example we used to pronounce the silent ‘k’ in ‘knight’ /nIEt/ and ‘knee’ /nEE/ and the ‘w’ in ‘wrong’ /rOng/.

But there are exceptions, as seen in these words:

This is where our spelling system gets confusing… We never pronounced the silent letters in these words. It might seem funny to us now, but fashionable 16th-century scholars liked the classical Greek and Latin roots of words and thought that they should be displayed more in English spelling,  ‘debt’, ‘salmon’ and ‘island’ are all examples of words with Latin and Greek-inspired silent letters – added just for style!

English spelling is more than phonetic code – there is a story behind every collection of letters. Next time you see a strange English spelling, check it out – where did it come from? Is it a fashion victim or historical survivor?

If you want to go to an English school in the UK, USA or Canada and learn more about the quirks of the English language please contact us now for further information.