Why Study in London & Brighton this Summer?

At St Giles, we believe that studying English is so much more than just learning the language – it’s also important to immerse yourself in the culture, try new experiences, make friends and make the most of your time studying abroad!

The UK is an exciting place to study, as it enjoys a rich mix of history, culture, global influences and traditions.

Summer in particular is a time when the country comes alive and you will find plenty of activities, events and festivals taking place across the country. We have gathered a list of events taking place in London and Brighton that should definitely be on your to-do list if you come to study with us this summer!

Brighton pride (3-5 Aug)
Brighton and Hove Pride is the UK’s largest Pride festival. The festival includes various events taking place across the city in celebration of the LGBTQ+ community, such as the Brighton Pride Festival which will feature pop icon Britney Spears as a headline act! Other events include the flamboyant and colourful Pride Parade through the streets of Brighton, the Pride Village Party on the city’s iconic seafront Marine Parade and the Pride Dog Show! Pride is free to attend, however tickets are required for certain events, such as the Festival concert. 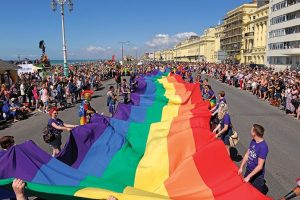 Paddle Round the Pier (7-8 Jul)
With over 50,000 people taking part in 2017, Paddle Round the Pier has grown into Europe’s biggest free charity beach festival and features the very best in water, street & urban sports, live music, kids’ entertainment and a host of other attractions. In the main event, hundreds of people of all ages will hit the water to surf, windsurf-board, canoe, kayak or paddle board all the way around the West Pier and back to the beach to raise money for charity.
Beachgoers can try many other sports including skating, surf Life Saving, land paddling, kitesurfing and freestyle Mountain Biking, whilst enjoying the (hopefully!) warm weather.
This year’s event will feature an attempt to break the Guinness World Record for the highest number of dogs on a paddleboard!

Luna Beach Cinema (14 Jun -15 Jul)
Can you think of a better way to spend a summer’s day than on the beach, with a cold drink, ice-cream and watching a great film?
Then head to Brighton Beach, which will host UK’s most exciting open-air cinema experience! The festival will show a fantastic selection of iconic films alongside the summer’s biggest sporting events, including the FIFA World Cup!
Films will include blockbusters such as Moana, The Shape of Water and The Greatest Showman, as well as classics such as Top Gun and Dirty Dancing.
Tickets start from just £3, or you can pay more for premium tickets to include comfy seating and even a VIP beach hut! It comes complete with fully stocked mini-bar and butler service.

Notting Hill Carnival (26-27 Aug)
Notting Hill Carnival is Europe’s biggest street festival and takes place over the August bank holiday weekend every year in Notting Hill, West London.  The Carnival is a celebration of the capital’s Caribbean communities, their culture and traditions, and features fantastic live music ranging from reggae to dub to salsa. For the Carnival Parade, colourful and elaborate floats and performers make their way through the streets. There will also be plenty of food and drink stalls to keep you going throughout the day. The Carnival is completely free to attend, so dress in your brightest colours and join in the fun! 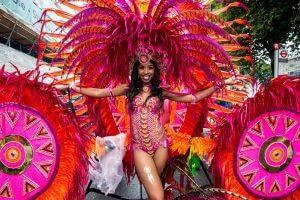 Wimbledon (2-15 July)
The world-famous tennis tournament will be taking place from 2nd to 15th July this year. As one of the biggest tennis events in the world, tickets are understandably extremely hard to get your hands on. However even if you don’t have a ticket, there are plenty of places around London to watch the matches. Many bars and public spaces have big screens where you can relax and watch the tournament.

London Pride (7 July)
Celebrate the diversity of the LGBTQ+ community with the colourful Pride in London parade through central London, free festivities in Trafalgar Square and city-wide events.
Pride in London celebrates the capital’s LGBTQ+ community with events including theatre, dance, art, cinema, parties and activities across the city. The two-week festival culminates in the colourful Pride in London Parade in central London and free performances in Trafalgar Square on 7 July.

Regent’s Park Open Air Theatre (May-September)
For theatre-lovers, this will be a real treat! Regent’s Park Open Air Theatre is the oldest permanent outdoor theatre in Britain. It offers a range of theatre, music, comedy and film events each year from May-September. In summer 2018, theatre performances will include Peter Pan, Shakespeare’s As You Like It, The Turn of the Screw and Little Shop of Horrors. You can find out more about the shows and ticket information here.

Urban Beaches
You don’t have to go to the coast to visit the beach in the UK this summer! London has an amazing array of Urban Beaches where you can enjoy the sunshine (and an ice cold drink!). Locations include the Queen Elizabeth Olympic Park, the Southbank Centre and London’s Royal Docks. We admit that an urban beach is quite different to a real beach, however, at least there will be fewer seagulls trying to steal your food!